early in the morning, near the culmanation of the Innovent project, Tilly Gifford and we set out on a creative adventure.

a public collaboration without permission decorates two trees in a cobbled park in the center of Vichy, in France.

we would draw on our respective trees until someone called out ‘switch.’

the imagery is born largely from the preceding weeks observing birds for Innovent (see: https://foolishnatureblawg.wordpress.com/2013/11/30/innovent-story/ ). 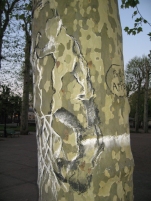 those people who observed us so early in the morning, covered in charcoal drawing on the trees, ignored us. 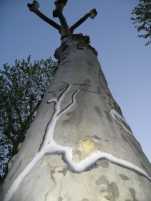 these works on the trees can serve to bring an artistic injection into the city.

a grand stage to speak of urban ecology.

or simply, like many tracings of shadows on the city streets, a vehicle to draw peoples attention to what grows around them.

a public visual communication which, for me at least, far exceeds the potential to communicate of public and commercial gallery spaces. 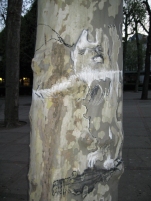 though it does not have the interpretive guided representation of gallery spaces, it is possible that it is intriguing for lack of this. 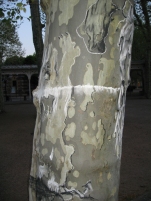 or maybe no one gives these scribbles a second look, but regardless the attempt to communicate publicly and visually is made within an urban visual environment often bastardized and made superficial today through urban commercial persuits.
46.131859 3.425488
Champ-Capelet, Vichy, France

View all posts by foolishNATURE →